How are you liking it so far? We have already seen some of the fundamentals of the French language like the alphabet, numbers, and pronunciation. Today, we will focus on learning subject pronouns in French.

We will learn lots of vocabulary in the upcoming lessons so we can start creating simple sentences. As we move forward, our sentences will be more structured and complex.

However, before going any further, we need to understand one of the most important elements of a sentence: the subject. Just like English, French requires all sentences to have one.

In this case, we will concentrate on subject pronouns. Are you ready? C’est parti! (another expression meaning “let’s go!”.

What Are Subject Pronouns? 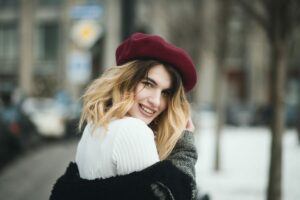 To answer this question, we need to talk about the subject first. Do you remember your English lessons at school?

In any sentence, the subject is the who that performs an action. Look at the example below:

My mother walks every day.

Who walks every day? My mother. Right! My mother is the subject.

Now, when we don’t specify a person, we use a subject pronoun. Look at the following example:

She walks every day.

Who walks every day? She. Right! She is the subject.

Below is a list of subject pronouns in French.

Let’s break this down a little further. For starters, did you notice for I we can use either je or j’? What’s the difference? Well, in reality, j’ is just a contraction of je. In French, contractions are very common, but unlike English, in most cases, they’re not optional. You have to use them.

Going back to j’, we use it when it precedes a verb that starts with a vowel. Look at these examples:

It’s incorrect to separate the subject pronoun from the verb in the examples above.

Did you also notice that there are two forms for you and we? Are you still with me? Let me explain.

English uses the pronoun “you” for both the singular and plural forms of the second person. Something similar happens with vous in French.

However, we mentioned there are two ways to say you. The second form is tu. What is the difference then, if any?

To answer this question, we need to understand two concepts: le tutoiement and le vouvoiement. You will more commonly hear the verbs tutoyer and vouvoyer which are literally two different forms to address someone as tu or vous, respectively.

The difference is, we only use tu in informal contexts. It’s common to use it when addressing your husband, wife, siblings, children, or friends, but not when talking to an elder, your boss, or a stranger. It’s French etiquette.

When talking to someone you owe respect, you have to use vous. Unless there is a close relationship between you and the other person, don’t use tu when addressing him/her. It comes across as disrespectful, and French people are very mindful of this. To be on the safe side, you can always vous.

We also mentioned we use vous for you plural. In this case, there’s no room for confusion since we always use vous when addressing more than one person.

The French equivalent of we is nous. However, more often than not, you will hear the term on being used instead. The French love to use it, and you will have to follow suit if you want to sound French.

Look at the following example:

They both mean “We live in Paris.” The only difference is, on is way more common. Nous is more common in formal settings.

However, on is a little bit more complicated. In most cases, it means we, but it can also mean other things. You will have to look at the context in which it is being used.

Besides we, on can also mean one. Example: On doit bien chercher (One has to look carefully).

It can also mean someone, they, you, or people in general.

Finally, we can also use on instead of passive voice. Example: On m’a dit que tu étais malade (I was told you were sick).

In English, we only use they when referring to the third person plural. Without a context, it’s impossible to know if we’re talking about men or women. It may not even matter.

However, in French, we have to distinguish between masculine and feminine nouns/pronouns. Look at the following example:

They dance on weekends.

If the group of people you’re talking about is composed of both men and women, you use the masculine form ils.

In English, we use “it” to refer to objects, animals, or concepts. There is no such thing in French. Instead, we have to use il or elle depending on the gender of the noun it replaces. Everything has a gender in French.

The same concept applies to ils and elles. They have to agree with the nouns they replace.

Subject pronouns have to agree with gender, quantity, and verbs. To simplify things, we can divide them into two categories: singular and plural.

The singular pronouns are je, tu, il, elle, and on.

The plural pronouns are nous, vous, ils, and elles.

This will help us to conjugate verbs correctly.

Once we understand this, we have to focus on gender. The only ones we have to be careful with are il, elle, ils, and elles. Remember il/ils are masculine, while elle/elles are feminine.

That means pronouns also have to agree with adjectives. Adjectives are neutral in English, but not in French. Look at the examples below.

Il est heureux (He is happy).

Elle est heureuse (She is happy).

Ils sont mignons (They are cute).

Elles sont mignonnes (They are cute).

We will talk about verbs and adjectives in more detail in upcoming posts.

Subject pronouns in French are a little bit different from their English counterparts. Nonetheless, they are widely used in both formal and informal situations.

Today we learned the key differences between tu and vous. We learned that respect is very important to French people, and this includes the language.

We also learned the different uses of the pronoun on. Remember you have to master it since it’s very commonly used in the French-speaking world.

Don’t forget gender plays a big role in the language. Don’t worry if it seems like too much right now. You will eventually get used to it.

Well, that’s it for today. I hope you enjoyed the lesson. Feel free to leave me any questions and comments below. Au revoir! 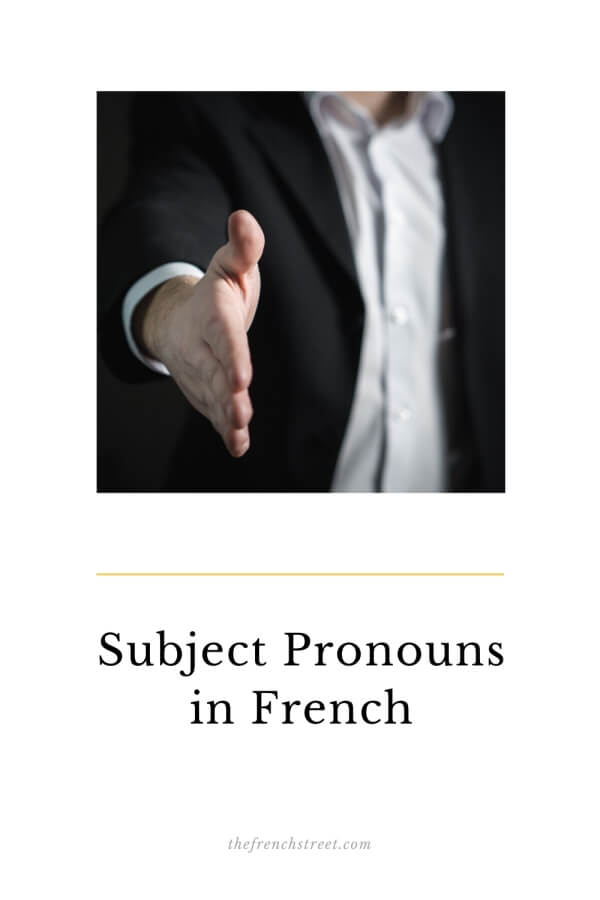 8 thoughts on “Subject Pronouns in French”